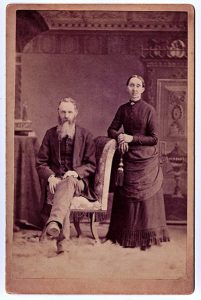 Elizabeth2 “Lizzie” Johnston, (John1), 5 October 1838 1-11 March 1931. Elizabeth was born in Philadelphia, Pennsylvania, 2 about two years before her parents moved to “Canada West” (Ontario). 3 If we apply the “Scottish naming pattern”, Elizabeth, as the very first child and daughter of John Johnston and Margaret Tait, could have been named after her maternal grandmother. Therefore, “Elizabeth Tait” may have been the name of her maternal grandmother back in Ireland. Lizzie was raised at her parents farm near Holt, Ontario. On Tuesday 26 January 1864 Elizabeth married Robert “Bob” Johnston, 15 March 1832-13 May 1925, 4 at the Scotch Church in Newmarket, Ontario. 5 Robert’s younger sister, Nancy, of Whitchurch Township and John Arnold of Scott Township witnessed the ceremony. On the same day Nancy married John Arnold and so Elizabeth and Robert, in turn, witnessed their wedding ceremony. Robert, Elizabeth and Nancy are recorded on the civil marriage registries with a “t” in their surname. Robert was the second son of Samuel Johnston and Ellen Dougherty of Munahen [sic] Township, County Tyrone, Ireland. It is said that Robert was born in a place called Mark [?], County Fermanagh, Ireland and had been about a year old when his family came to the new world. The family suffered the loss of an infant daughter on the voyage. Robert’s paternal grandparents in Ireland had been Robert and Esther Johnson. Although Robert’s gravestone, as well as some early records do not include the letter “t” in the spelling of his surname, all of his male descendants have spelled their name with the “t”. Robert and Lizzie cleared their land for farming, raised a family and resided in the Mount Albert, Ontario area for all of their lives. Elizabeth seems to have had the upper hand in naming their children; all of the names of Robert and Elizabeth’s children are among those of her parents and siblings, except for “Henrietta” (1.1.5) and “Hannah” (1.1.7). Note that their sons were named John and Benjamin rather than Robert, or even Samuel (Robert’s father). Elizabeth and Robert both lived to be about ninety-three mighty years of age. Elizabeth and Robert are buried close by Elizabeth’s mother in Mount Albert Cemetery, Mount Albert, Ontario. Elizabeth and Robert had seven children.

1 Elizabeth Johnston, registration of death number 025875 (1931), Archives of Ontario, York County Register of Deaths. The registration states that Elizabeth was born 5 October 1838 in Philadelphia, U.S.A. The informant was her daughter “Mrs Thos Moore”, nee Mary Jane Johnston. The registration is dated 14 March 1931. Elizabeth’s entry in the 1901 Ontario census states that she was born 6 October 1838.
2 Uxbridge Journal, January 1924 edition. Under the caption “DIAMOND WEDDING” a portion of this informative item states that Elizabeth “came to Canada from Philadelphia, Pa., with her parents when she was quite young, and they settled in East Gwillimbury.”
3 1901 Ontario Census, District No. 97 North, Sub District No. n, Polling sub-division No. 5, Scott Township, Ontario County, page 9. Reel T-6486, National Archives of Canada, 395 Wellington Street, Ottawa, Ontario. This 1901 Ontario census states that Elizabeth entered Canada (in column for “Year of Immigration to Canada”) in “1840”. Elizabeth would have been about 2 years old and therefore would have been with her parents.

18 Robert Johnson and Elizabeth Johnston gravestone, Mount Albert Cemetery, Mount Albert, York Region, Ontario. Benjamin’s name, year of birth and death, “1876 – 1882”, are inscribed on his parent’s gravestone.
19 William H. Thompson grave monument, Mount Albert Cemetery, Mount Albert, York Region, Ontario. The dates inscribed for Hannah read “Apr. 17. 1879 — Jan. 28. 1970”. The The Newmarket Era and Express, Uxbridge Journal and The Globe and Mail newspapers have been searched and no death notice for Hannah has been found. There has been no birth registration found for Hannah. At the time Scott Township seems to have been especially lax in regard to registering births.
20 William