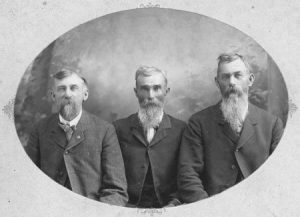 James “Jim” M.2 Johnston, (John1), 10 June 1844-17 June 1904. 1 James was born in “Canada”. James was the fourth child/third son of John Johnston and Margaret Tait of Lot 14, Concession 7, East Gwillimbury Township, York County, Canada West (Ontario). James was likely named after an uncle who may have remained in Ireland. On 13 May 1865 James came to Alpena, Michigan. In 1876 James married Sarah Elizabeth Pollard, 2 February 1848-23 December 1927, 3 in Alpena, Michigan. Elizabeth was born in Old Town, near Bangor, Maine and was a daughter of Samuel Pollard and Sarah Murphy. The Michigan census for 1900 confirms that James was indeed born in “Mch 1844” in “Canada”. The 1900 Michigan census record also gives us his middle initial “M.” and provides his address as “212 First Street, Alpena, Michigan”. It is apparent from several published accounts that James became a notable and firmly established businessman. A front page article on the passing of James M. Johnston that appeared in the Wednesday, June 22, 1904 edition of the Alpena Argus provides a wealth of information on his life and times. A portion of that lengthy memorial reads:

Mr. Johnston was born March 10th, 1844, at Gilsburg [?], Ontario, and came to Alpena, May 13th, 1865, when Alpena was only a small village, with no industries to speak of, a few sawmills being the only features of the place, with nothing in view that would lead one to imagine it would grow to be the principal city on the Lake Huron shore. Being possessed of fine business ability, Mr. Johnston at once set out to make his mark in the business affairs of the village. As years passed away, he gradually accumulated a share of the world’s goods, by hard knocks and shrewd investments, until at the time of his death he was in comfortable circumstances.
During his lifetime he had held many city offices, and up to a few years ago he had always taken an active interest in local politics, having served as supervisor three terms, two of which he acted as chairman of the board. He was also at one time a member of the board of education. He discharged the duties of these offices in the same careful business-like manner with which he conducted his own affairs, and was a valuable public official. He was a life-long Republican, and never shirked any duty imposed upon him by reason of his affiliation with the party. Deceased was a respected member of the Masonic order, belonging to Alpena lodge, F. and A. M., as well as being a Knight Templar and a Shriner. He was also a member of the Maccabees and A. O. U. W;, as well as of the veteran’s corps of the Alpena Guards.
His widow, two children – Frank B. and Caroline M. – two brothers and two sisters survive him.
The funeral took place Sunday afternoon, from his late residence, under the auspices of Alpena lodge, F. and A. M., the members of Alpena commandery acting as an escort. Rev. A. A. Warren Hastings officiated. The funeral was one of the largest ever witnessed in the city.