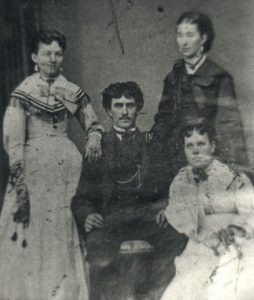 Sarah Jane2 Johnston, (John1), 6 February 1850-18 February 1888. 1 Sarah Jane was the seventh child and second daughter of John Johnston and Margaret Tait. Sarah Jane was born on her parents farm at Lot 14, Concession 7, East Gwillimbury Township, York County, Ontario. The 1851 census for East Gwillimbury, taken in early 1852, states that Sarah Jane would be 3 years of “Age at next birthday”. If we apply the “Scottish naming pattern”, Sarah Jane, as the second daughter of John and Margaret, could have been named after her paternal grandmother. Therefore, “Sarah Jane Johnston” may have been the married name of her paternal grandmother back in Ireland. On Thursday 27 October 1870 Sarah Jane married Thomas Evans at “the Manse” church in Newmarket. 2 Thomas was born 23 September 1846 3 and died 8 December 1910. Thomas’ younger sister Mary Evans and her future husband Francis Wasley witnessed the ceremony. Fortunately the civil marriage registry preserves the maiden name of Sarah Jane’s mother Margaret, as “Tait”. The 1876 marriage registry of Sarah Jane’s older brother Samuel (1.6) also documents Margaret’s maiden name spelling it “Tate”. Either form is considered correct. Thomas Evans was a son of John Evans, c 1803-5 June 1865, and Betsy Arbuthnott, c 1822-20 February 1901, who had lived on the fourth Concession of East Gwillimbury Township. Betsy’s gravestone states that she had died at 78 years of age and had been the second daughter of the Honorable Alex Arbuthnott. A complete history of Alexander Arbuthnott can be found in the Peerage of Scotland [born 16 January 1778]. The 1871 Ontario census shows Sarah Jane and Thomas living in East Gwillimbury on the south-west quarter of Lot 24 of the fourth Concession, part of the original Evans’ farm settlement. Eventually they moved to a farm located on the county line at Lot 15 of the first Concession, Scott Township, Ontario County, Ontario. The farm had belonged to Thomas father, John Evans, and is close to the town of Mount Albert, Ontario. Close neighbours included Sarah Jane’s sister Elizabeth and her family and brothers Benjamin, Samuel and their families. All of these families had farms along the county line in Scott Township in the 1870’s. Sarah Jane and Thomas had at least eight children before Sarah passed away in 1888 at 38 years of age. In the Friday, February 24, 1888 edition of The Newmarket Era Sarah was mentioned under the heading “Mount Albert”:

“Mrs. Thomas Evans who has been suffering for some time of late, died on Sunday last. She was carried to her last resting place on Wednesday. She leaves her husband with a family of small children to mourn their loss.”

Sarah Jane’s doctor did not register her death until four months later. He had likely forgotten when she had died and so the record does not state a date for her death and identifies her simply as “Mrs. Thomas Evens”. The death registry does state that Sarah Jane died due to “Double Pneumonia Between 3 & 4 Weeks(?)”. Thomas continued to raise the children on the farm and some still resided there with him at the time of the 1901 census. Sarah Jane, Thomas and several of their children are buried in Newmarket Cemetery where other Evans family members had customarily been buried. Sarah Jane and Thomas had eight children.

From an old Tin Type of about 1870; Left to right:
Sarah Jane, her husband Thomas Evans, Sarah’s sister Mary Ann, and a friend of the family (seated)