George1 Hamilton, about 1799 1-10 March 1873. 2 According to his Ontario civil death registry George was born in County Derry, Ireland. 3 If we consider the names and order of George’s children and apply the traditional “Scottish naming pattern” to his family we can see that the names of his parents could have been James and Matilda Hamilton. The male head of a Scottish or Scots-Irish family often named the first son after his father, and the second daughter after his mother. The second son and first daughter were often named, as is the case here, after the mother’s parents. According to family tradition about 1819 George and perhaps two brothers emigrated to New Brunswick. One possible older brother, James Hamilton, emigrated from County Derry in 1819 and settled in Sheffield Parish, Sunbury County, New Brunswick. Another brother is said to have settled in Halifax, Nova Scotia. The Edward Patchell family of the parish of Glendermot, County Derry also came to New Brunswick at about the same time as George and his brothers. On Wednesday 18 September 1822 George married Jane Patchell at Saint Andrew’s Presbyterian Church in the parish of Lancaster.4 Lancaster was then a small community that later became the city of Saint John. These Lancaster parish records also state that on 30 September 1825 their first two children/sons were baptized there. One fact that links these two families together is that their early burials were concentrated in the same small local cemetery. Also, the gravestone of Edward Patchell’s son David states that he was born in Saint John, NB. Some time in the 1830’s George and his family moved to Nova Scotia. 5 George and Jane apparently had nine children in the Maritimes before they moved to Canada West in about 1844/45. By about 1848 they had finally settled at Lot 5, Concession 7, North Gwillimbury Township, York County in the Home District of Canada West. At least one of Jane Patchell’s brothers was in the Home District as early as 1842; On 2 January 1843 Edward Patchell [Jr.] married Catherine Somerville in the Home District. Catherine had been born in Ireland and is also thought to have lived in the Maritimes. George Hamilton’s family may have accompanied the Patchell family from the Maritimes to York County, Canada West. In any case the 1851 census for Canada West, taken in early 1852, provides certain knowledge that the known members of the Edward [Sr.] and Mary Patchell family were residing in King Township. That census also confirms that George and Jane were farming in nearby North Gwillimbury Township. George’s death registry of 24 March 1873 informs us that he died after suffering for six months with Asthma. George is buried in what is now known as “Pioneer Burying Ground” located on Eagle Street in the town of Newmarket, Ontario. His gravestone is cemented into a cairn next to the stone of his father-in-law, Edward Patchell. Jane passed away 20 September 1888 and she was buried in nearby Queensville Cemetery, Queensville, Ontario.6 George and Jane Hamilton had 10 children and at least 54 grandchildren.

4 George Hamilton-Jane Pechell marriage, 18 September 1822, in Register of Marriages (original record), St. Andrew and St. David Presbyterian Church, Saint John (Lancaster Parish), New Brunswick. This marriage record states that George Hamilton and Jane Pechell (Pechell is a variant, and earlier form, of the Patchell name) were both of Lancaster. Lancaster Parish then consisted of a small community that later became part of the city of Saint John. The record of their marriage is now preserved in the Saint John Regional Library at One Market Square, Saint John, NB. Lancaster Parish records also state that on 30 September 1825 George Hamilton and Jane Patchell’s first two children/sons were baptized.
5 George Hamilton household, 1851 Canada West Census, York County, North Gwillimbury Township, enumeration district [ED] 405, page 45, line 40; Library and Archives Canada microfilm C-11,761. George Hamilton and Jane Patchell’s sixth child and fourth son, George Hamilton (Jr.), believed to have been born 10 October 1837, is listed in all census records as born in Nova Scotia. His older brother Andrew, believed to have been born 25 January 1835, appears only in the 1851 Canada West census, and is listed there as born in Nova Scotia.
6 Jane Hamilton gravestone, Queensville Cemetery, Queensville, York Region, Ontario. This monument’s inscription reads: “JANE WIFE OF GEORGE HAMILTON DIED SEPT. 20, 1888 AGED 87 YEARS.” This inscription claims that Jane was 87 in 1888, indicating that she was born in 1801. However, census records state that she was 47 in 1852 or 1853 [born about 1805-6], 59 in 1861 [1802], 67 in 1871 [1804] and 74 in 1881 [1807]. Her age widely varies in these records so it is difficult to know for certain what year she was born in. Janes gravestone inscription and her entry in the 1881 census give us outside parameters for her birth year of 1801 and 1807. If Jane had been born in 1807 she would have been about 15 when she was married.
7 Baptisms (30 September 1825); St. Andrew’s Presbyterian Church, St. John, New Brunswick. James baptism record states that he was born “July 14, 1824.”
8 James Hamilton gravestone, Queensville Cemetery, Queensville, York Region, Ontario. This monument’s inscription reads: “James Hamilton born July 14 1825 died March 19, 1898.” This inscription should give James birth year as 1824. 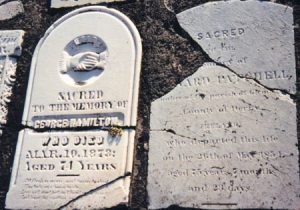